skip to main | skip to sidebar

OK, so the official Summer of Code coding period has ended, so what better time to sum up the status of my project and the general experience I have had.

The last two weeks have been pretty hectic, as I have been trying to make my finished code as complete and polished as possible. Generally, I feel like all the required functionality of the virtual keyboard and keymapper is there, but I am sure that there will still be bugs hiding in there. Here is a summary of the the work I achieved in the last couple weeks:

The one major thing that I simply did not have time for was proper documentation of all the virtual keyboard and keymapping features. This is something that I will work on over the next few weeks (at a somewhat more leisurely pace! :). I feel that overall I have achieved what was set out for me at the start of the project, and hope that I can do the required work to get my code merged into the trunk sometime soon.

Firstly, I would like to say that I have thoroughly enjoyed my summer working with the ScummVM team. I will be the first to say that we didn't exactly get off on the right foot, and that my participation has been a bit 'patchy', but after all is said and done I hope that I have made a valuable contribution to this project! Has been great having Joost as a mentor, was always there to answer my questions and encourage my progress. Was also very helpful to hear Eugene and Max's opinions when I was unsure about my project's direction. The only regret I have is that I feel that I could have maybe pushed myself to acheive more if I had gone for a more ambitious project, but then again I would not have wanted it to all end in failure! At the end of the day, I think the GSoC is a wonderful experience and will be returning next year, maybe even for ScummVM (if you'll take me! ;) So, thats it for now. Over the coming weeks I will write proper documentation, and continue working towards making my code stable enough for ScummVM. Thank you, and good night!
Posted by Kenny at 21:17 No comments:

Time for another quick update on my progress recently. Generally, I think I am still on track with my plan of action that I set out a couple weeks ago.

So, finger's crosses, I should have most of this done by the weekend. That leaves next week to really finish and clean up the code, test thoroughly and write documentation. OK...back to work!
Posted by Kenny at 14:31 No comments:

Thought it was a good time for a quick update. I've made a lot of progress on the keymapper since my last update, with most of the infrastructure in place now. Most of the interface to the rest of the system is implemented (in the Keymapper class). The KeymapManager (where the loading/saving and automatic mapping will be done) still needs work, and will probably be quite tricky! Anyway, here is a summary of my major progress and any design decisions I have made since my last post:
So I am well on track with my schedule at the moment. For the next few days I will go back to working on the Virtual Keyboard, as there are a couple of features that are still needed.

One last thing...thought I'd better let you know that I'm going to stay with my gran up in Scotland from tomorrow till Monday, which means I probably won't be online much. But, I'll be taking my laptop and should be able to work without it.
Posted by Kenny at 01:06 No comments:

So its been a while since my last update, and for most of the time I've been busy planning the rest of my project. I'll get on to that later, but first let me sum up exactly where I got to with my coding.

After doing this, I started researching the keymapper task, so that I could get a better idea of all the stuff I have left to do. After reading up and asking questions on the mailing list I was ready to come up with a breakdown of my design.

I chose to break down the keymapper task into four main classes that I would need to implement. Now that I had a good understanding of the second part of my project I came up with a rough TODO list.

Virtual KeyboardKeymapperThe last part of my planning extravaganza was to plan how I would spend my time over the remaining weeks.

I have decided to get going on the Keymapper class in the next few days, before hopefully coming back to finish the Virtual Keyboard once I have some good images available. 18th July - 23rd July 24th July - 28rd July 29th July - 8th August 8th August - 11th August 12 August onwards Done! Sorry for boring you guys with all my planning, but I guess this benefits us all! Time to get back to the code...
Posted by Kenny at 23:27 No comments:

Time for a quick update on the huge progress I have made in the past few days.

Thanks to Vicent's great work implementing the XMLParser base class this was a relatively simple task. There was a lot of error handling code to write, and I added a couple of new features to the base class. Apart from that it didn't take me long at all to have a parser that was parsing the file format that I had earlier settled upon.

This involved writing the event loop that would be run while the virtual keyboard was visible. It involved catching all the mouse click events, and passing them to the processClick() method. I also had to ensure the screen was being updated (so that the mouse cursor continued to move) and that EVENT_QUIT events were handled properly (so that closing the window had an effect).

The main challenge here was implementing keycolor transparency for the keyboard bitmap. To do this I created a subclass of Surface, SurfaceKeyColored, that provided a blit() method. This method would be passed a source Surface and a transparency color, and any pixels in the source Surface that was not the same color as the transparency color, would be copied into the Surface. Once I had this class, I could grab the overlay into an instance of SurfaceKeyColored, then blit the keyboard bitmap's Surface into it, before copying the SurfaceKeyColored's pixels back into the overlay. Below are some images demonstrating it in action: 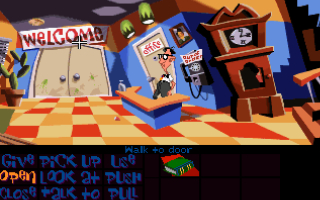 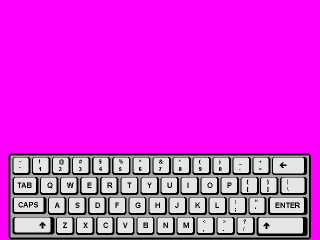 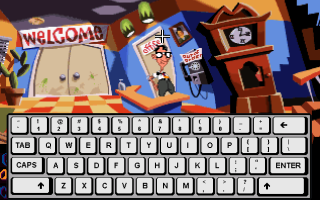 After I had the bitmap's being displayed and the event loop implemented, I could test my image map code that I had written last week. The processClick() method of my VirtualKeyboard class simply had to pass the mouse co-ordinates to the corresponding ImageMap class and it would return the ID string (ie. the target attribute) of the matching area. I created a few image map areas for some keys of my test image in GIMP (making sure to use rectangle and polygon areas), then used the exported HTML in my keyboard pack XML file. After a couple of bugfixes I got the ImageMap working perfectly, proving that my Polygon::contains() method was correct.

Tomorrow I will try to create a complete keyboard pack, with multiple modes and resolutions, together with complete image maps, and event specifications. This will allow me to fully test my current code, as well as test the little bits of code that I am still to write.

Before I start work on writing the parser for the virtual keyboard's XML file, I need to tie down the format of the file. Yesterday I came up with the following as my first idea:

Here each mode tag refers to a different keyboard display, and each mode has a number of layouts - which provide different resolutions for each mode. Doing it this way - rather than having layout as the parent of mode - was a pretty arbitrary choice, with a slight advantage of being more flexible.

Where the target of each area refers to an event tag by its name property. This is nice because it means the map sections now use pure HTML IMGMAP syntax. This means the target property can be specified when using an image map tool, and then the output just pasted into the file without any additions.

Therefore I think this format will be the basis for my first attempt at the parser. However, any comments on it will be much appreciated!

We are now in the 6th week of the Summer of Code and through a number of circumstances, both in and out of my control, I am pretty behind schedule. My coding in the last few days has shown great promise that I can quickly get back on top of things, but I think it is time for me to lay down a revised schedule for the coming months. The first stage of my schedule is pretty tight - but I have ample time at the moment and am willing to work all the hours in the day to make up for lost time.

The following is slightly vague, due to my lack of knowledge